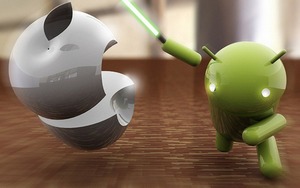 Ever since I owned my first smartphone, which was an iPhone 3G, I’ve kept an eye on Android phones to see if they could compel me to switch over. My first experience was borrowing the original Google Nexus phone for a month when my iPhone 3G contract was about to expire. At that time the OS just wasn’t up to par (I think I was using Froyo) and many of the apps I used on iOS just weren’t available. Then I tested out a Samsung Droid Charge last year which was running Gingerbread. The OS still wasn’t up to par and while there were more apps available, there still were some that hadn’t been ported to Android.

The OS and App reasoning are the two major reasons that have prevented me wanting to switch. However, I own an iPad 2 but have been intrigued by the 7″ form factor so this month I decided to purchase a Nexus 7 and my experience with it has been fantastic. Jelly Bean (aka Project Butter) has finally gotten the OS to a level that is very satisfying for a longtime iOS user. Also, the majority of apps that I’ve wanted are now available on Android. Now I’ll point out the additional reasons that are causing me to consider switching now that the OS and app issues have been removed.

Screen Size
As I’ve reached mid life and am now in my 40’s, my eyes aren’t what they used to be. Over the last 2 years using a 3.5″ screen hasn’t been a pleasant experience. Testing 4+” screens on Android has really opened up my eyes to a much better experience. Android phones have matured to where they have balanced the aesthetics and battery life consumption to be adequate on these larger screen phones. At this point there are rumors of the iPhone 5 having a 4″ screen. We’ll have to wait and see.

No Contract / Lower Monthly Service Charge
For my Son’s eighth grade graduation I decided to buy him a smartphone as a gift as he heads into high school. He originally wanted an iPhone so I looked into what it would cost to get him one on my current Verizon plan. I currently pay ~$80 a month for 350 minutes of voice with limited texting and data. I would have to upgrade to a family plan with a combined 700 minutes, unlimited texting, and data for ~$160 a month. That monthly cost just seemed ridiculous to me so I looked into other options. The best options I found were to just buy him a no-contract phone and get him service through either T-mobile or Virgin Mobile. He chose to get the HTC Evo V for $299 and a plan that gives him 300 minutes of talk time with unlimited texting and data for $35 a month. Virgin uses the Sprint network, and supposedly they get limited access to towers and have bandwidth restrictions but so far my son has been happy with the service.

I recently read this story about purchasing a Google Galaxy Nexus HSPA+ for $350 with a $30 a month plan for 100 minutes of voice and unlimited text and data on T-mobile. Another interesting development is that Virgin also recently started offering iPhone pre-paid plans now as well and offer that same monthly service I got for my Son for only $30. For tethering there are several easy workarounds such as this one available to Android users to avoid getting nickle and dimed additionally from the major carriers. The ability to buy a no contract Google Nexus or iPhone has become extremely appealing to me. I’m tired of getting locked in for 2 years and overpaying for service.

Data Speeds
Pretty much every carrier now offers faster data speeds that are available to Android phones on their network but the current iPhones don’t have the hardware to support this yet. Once again, this may change with the release of the iPhone 5 but we’ll have to wait and see.

Android TV Integration
This is a new up and coming development. I see many signs that Android is about to really get a grip on being the best device to use on a TV. I currently own both a Boxee and a Logitech Revue (Google TV) and for years have tested many solutions to stream media and access internet services on my TV. There is a new breed of “pocket tv’s” coming out that use the Android OS by Equiso and Infinitec and many others that look to be amazing products. On the consumer end the recently released Vizio Co-Star which is a 2nd generation Google TV box for $99 and sold out in the first 12 hours of release. Then you have the announcement by XBMC, which is regarded as one of the top media players, announcing support for Android this week being developed on another interesting Android box for a TV. Another great option that I’m also testing is Plex which is a fork off of XMBC. While it’s available for both iOS and Android. The iOS version is limited to running on iPhone and iPad while the Android version is available for Google TV as well as the Android devices I’ve mentioned.

Sure this isn’t a phone specific feature to sway me from iOS to Android but my goal may also be to have a single OS and app environment to support and this functionality may play a role in that decision. Android is moving so quickly down this path that Apple better seriously consider opening up the next generation of their Apple TV to support their app ecosystem. Without that I think they will fall behind very quickly in this area and releasing a bundled hardware tv solution alone won’t do them any good. I’ll be writing a more comprehensive post on Android’s move to the living room very soon.

Next Steps
So I’m anxiously awaiting the next release of Google’s next Nexus phone as well as the iPhone 5 to determine what will replace my current iPhone 4 when my contract expires in January. I’m starting to lean towards the next iteration of the Google Nexus. It’s doubtful that no matter how mesmerized I become with the iPhone 5 / iOS 6 release, that I’ll allow Verizon to bamboozle me into another 2 year contract. However if the iPhone 5 becomes available for purchase through Virgin Mobile or another carrier without a contract, it might weigh in on my decision more. If Google’s release though is impressive and I continue being enamored by Android past my current honeymoon phase I might just finally make the jump from iOS to Android. Only time will tell.