Online Voting Systems are Clearly Broken but How Can They be Fixed? 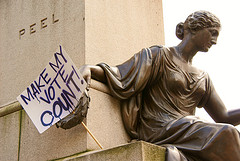 This week Micki Krimmel wrote a very poignant and thorough post on her experience with the Pepsi Refresh Challenge. She described in great detail her process to enter the contest, the ensuing issues with their voting system, and the drudgery of continually eliciting (read: spamming) friends to vote on your behalf.

Here’s an excerpt where Micki rips the covers off of what online voting contests are and begs a question:

Much ado has been made lately about the Pepsi Refresh contest and online voting contests in general. Contests like these are thinly-veiled marketing tools for the companies hosting them. Everyone who enters a project in Pepsi Refresh becomes a willing marketing drone to benefit Pepsi at the cost of his/her own social capital. What does Pepsi give in return for that precious social capital?

In answering Micki’s questions above, we (the voters) often don’t get anything from the companies that hold these contests because they are just catalysts for us to support our friends. This week was also marked by the constant requests in our streams to vote on each others SXSW panels. I try to limit my involvement in campaigning at all when it comes to online voting as I cringe a bit whenever I send out requests for votes. I personally just get a sickly feeling pandering to the rules set by these voting systems and yet I continue the process because the action of supporting my friends is stronger than the repercussions of spamming them.

The biggest problem with online voting is that often those competing will not win or lose on the merits of their submissions but on the strength of their social networks willing to become ballot stuffing robots for them. It becomes purely a popularity contest as voting on merit is cast aside simply for the support of friends.

Besides looking at this from the social aspects and front end I also have had to manage the creation of online voting contests for work and I can tell you that on the back end there are just as many problems to contend with. Micki discussed issues with regards to transparency, daily voting requirements along with proxy voting, and entrant discovery issues. These are all valid and only some of the often difficult issues when implementing a voting contest.

I mention that voting can become a popularity contest but even beyond that it can become an exercise in gaming a system. No matter what mechanisms you try to put in place, if there is a large monetary or other value attached to your contest, it will likely garner methods to circumvent the natural voting process. Sure there are ways to try and minimize bots and other unscrupulous voting methods but if you’ve experienced the process of playing whack-a-mole with your blog comments you know that the methods to overcome valid web submissions has become increasingly difficult. There must be underground networks fueled by human generated submissions for hire powered similarly to mechanical turk.

So depending on the nature of your contest it may require post voting analysis and auditing which can be a challenging and painstaking process. I’ve used PollDaddy in the past which offers some barriers such as limiting votes based on cookie or IP and they also provide voter logging which will list IP’s of individual votes along with count numbers, host lookups, and the ability to export the data if you want to slice and dice it even more. Having spent time doing post voting analysis I can tell you it’s an exhausting process.

So how do we fix this? It’s a difficult issue because these contests are usually marketing plays paired with methods to get user traffic to sites. So while it may be difficult for the tide to change in those instances there are plenty of other online voting contests that I feel organizers would like a better method for managing submissions to try and circumvent popularity contests.

Micki also pointed to this great post by Taylor Davidson on “voting fatigue” where he poses similar feelings and issues.

Here’s an excerpt with 2 links from another post on the Pepsi Challenge issues from Sloane Berrent:

…we need to change the game. But I’m first to admit I don’t have the answer. Simply ending all contests isn’t the answer. At first, I didn’t want to just say “this sucks”, without proposing a solution. But perhaps, by raising the issue, we can start to problem-solve this one out. I’ll certainly be paying attention.

There are some great comments in Taylor’s post that have started the dialog. I don’t have any holy grail answers either. This is a difficult problem to overcome but I feel that if a dialog is started on this topic that we could come up with some good ideas that get fleshed out into existing systems or be created in new ones.

Here’s an idea, how about if we were to start implementing more social features within contests? Instead of seeing a simple number of blind votes, how about when I land on a contest seeing the votes from my social graph along with the required reasoning why they cast their vote for a particular submission. I value my friends opinions and by easily seeing their votes and reasoning for supporting a specific submission, it could help shape my thoughts and ultimately act as a way to campaign for my vote.

This is just one quick idea and I look forward to hearing others thoughts on combating this issue that affects all of us.