I’ve recently returned from DrupalCon Denver 2012 and had some thoughts I wanted to share about the conference and the state of the Drupal Community. I’ve been a long-time fan of Drupal and became very acquainted with the system back in 2007 when I migrated the X PRIZE Foundation website from static html to Drupal 5 (version at the time). It wasn’t a very user friendly CMS and it took me quite some time to get the hang of it, but once I did it was clear how flexible and powerful the system was.

The Similarities between the WordPress and Drupal Communities

Before I began using Drupal I was a longtime WordPress user. I still use WordPress to power my personal websites (including this one). I love both of these open source projects and often get asked which one to use and the answer is still the same it was back in 2007. It depends on what your site is for. For most people who just need a blog or a very simple website I still often recommend WordPress. But if you need a website that requires deep permission levels, commerce, sophisticated caching, and more complex functionality, I recommend Drupal. This is just a high level recommendation and by gleaning more into a sites’ requirements it becomes easier to recommend one or the other.

The evolution of WordPress and Drupal have gone in somewhat similar directions. They both started as open source projects. The founders of both of these projects have created for profit company’s based on their open source software. Matt Mullenweg of WordPress created Automattic and Dries Buytaert founded Acquia. Both companies have also created free hosted versions, as well as fullyÂ managed business service versions of their software. Automattic createdÂ WordPress.com and Acquia createdÂ DrupalGardens. Both projects also host “Cons” and or “Camps” throughout the year were users gather together to share information and help further their respective projects. I just wanted to point out some of these similarities between both of these companies and how their for profit arms have also been instrumental inÂ helping insure the health of their projects. Both Automattic and Acquia also do a great job of contributing back to their open source communities.

So back to DrupalCon. I went into this year’s DrupalCon focused on the ways that I can extend the platform to help enable people to more easily create and publish content across our websites. The areas that specifically have been challenging are setting up simple wysiwyg interfaces both for page creation and media asset management, publishing workflows for multiple members on a team, and the ability to publish content between staging and production environments. Our current methods for these have pain points and I was on a mission to find ways to improve them and look to what the future of Drupal had in store to address these issues. Beyond my needs in these areas, I also feel that they are obstacles for other people who are potential users of Drupal.

The first keynote at DrupalConÂ by Dries spent time focusing on weaknesses in Drupal and specifically 3 things the community needs to focus on what he referred to as “A rudimentary authoring experience”. In a nutshell this referred to to several elements that require work to improve the usability of Drupal for content creators and site publishers. Some other key takeaways from the talk are that Symfony will be used for the framework in Drupal 8 and mobile needs to be addressed much better. This seems to already be in motion as there was no shortage of talks on responsive web design at DrupalCon. Dries’ keynoteÂ was the beginning of a pattern I saw emerge from many Acquia employees that spoke on panels at DrupalCon. Â They continued to echo and elaborate on Dries’ thoughts about what they need to work on to ensure the successful future of Drupal. 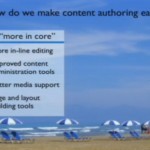 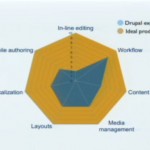 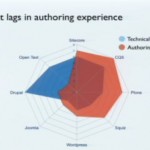 The first talk I saw along this theme was with Angie Byron and Chris Strahl titled “Five things we need to create an awesome experience for content creators” which focused on the following issues:

The talk covered how they had done research around usability among competing CMS platforms from a content creator standpoint. They showed how many of these features are handled on 4 competing systems including Squiz, Plone, CQ5, and Squarespace(v6 beta). They demo’d each of these 4 competing systems and showed where they excel over Drupal with the features and ease of site content creation and editing. In the end they plead their case to the development community to look at these systems and find ways to implement many of the usability improvements within Drupal in the near future as they ready Drupal 8 for release next year.

Another talk I attended was with Kieran Lal & Barry Jaspan. The approach of their talk was from a startup perspective on how Acquia was born and they provided many insights.Â They discussed the challenges encountered along with the multiple pivots from the original Acquia business model concept. They began by providing simple Drupal hosting solutions and evolved over time into a much more robust managed hosting platform for Drupal.Â What I liked about this talk is how Acquia has been nimble in learning what the needs of the customer base they’re trying to attract and how they’ve shifted their business model to accommodate them. Many nuggets of wisdom here for startup entrepreneurs can be gleaned fromÂ their talk.Â Acquia now has a very impressive list of clients that they can service much better.

Then I went to see Jay Batson do a talk that was similar with regards to the first one by Angie and Chris except it was done more as a first person view from the eyes of a site publisher. You can learn more about the profile of the “advanced content creator” role he describesÂ here. He explains how the term “Web Engagement Management”Â is starting to trump CMS and is now being used to describe the overall feature-set associated with the users that fill these content production roles. These features are now essential to people who continually create and manage the content for websites. More and more it’s the marketing department that owns the responsibility of websites and are now the decision makers for web platforms. This is a switch from years ago when IT would own that decision making process. So the critical motive behind all of this is to make sure that the marketing and site content departments needs are met by Drupal moving forward.

The sum of all of these talks by Acquia left me very impressed. They are uncovering the major issues potential clients are stating as they try to sell Drupal and formulating a plan to solve them. By rallying the community around these issues, I feel that they are focused and have a plan to continue being competitive and mature based on the needs of today’s site publishers.

The “How to build a scalable platform for today’s publishers” talk by Dick Olsson was another stellar talk I found to be extremely helpful with my goals of learning about better methods for content and site publishing. Dick provided a case study and recipe for the modules and methods he’s been using to build out sites for Al Jazeera. He needs to accommodate massive traffic and the ability to publish content quickly in a very intricate caching environment. You can watch his talk regarding those issues, but my focus was more on how he uses Workbench, Deploy, and Panels modules Â to effectively manage content workflow and publishing. It was a good talk that showed how these tools can all be used in conjunction very well. I also saw a talk on Panels showing some great new usability features coming soon.

I attended several of the BoF (Birds of a Feather) talks along the content publisher theme and got a lot out of the “Support the Content Creators” talk that was run by Melissa Anderson. Lots of great discussion and sharing of tools and practices which were captured in a great notes doc by Kat.

I love watching case studies from the ground up where an agency covers every step of a web development project with a client. The folks at Treehouse Agency are excellent at telling these stories. I really enjoyed how they provided the under the hood details of their approach and tools used to rebuild the Zagat.com website. They also did a talk on their work to relaunch Energy.gov on Drupal which I didn’t see at DrupalCon but was able to see a more in depth Drupal implementation of the Energy.gov project at BadCamp last year. Here’s the slide deck from that presentation.

Well there you have it.Â I see nothing but clear blue skies ahead for Drupal. 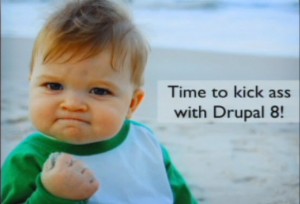