I’m Thankful for My Family, Computers and the Internet 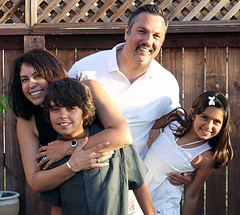 Just like most of us I’m thankful for many of the same things this Thanksgiving. I just celebrated my 14th wedding anniversary with Wife. She’s my best friend and partner and I can’t imagine not being with her. I have two amazing kids. My son just got 1 B and barely missed getting a perfect report card. My daughter (also gets great grades) just ran for and won the post of student body president. My Wife and I have been fortunate to be gainfully employed over the last few years and I truly enjoy the work I do for the X PRIZE foundation. Beyond that we’re all healthy. I couldn’t be happier about how my life is currently going, and sometimes worry because things seem so perfect.

So surely many of you also have similar things you are thankful for from my list above but another thing I often think about is having been so lucky to grow up and be living through the age of personal computers and the internet. [you can skip to the last paragraph for my main thoughts if you want] My first experience with a computer was visiting a friends house when I was 13 living in Chicago and watching his brother typing words on a keyboard that he was copying from a book that appeared on a black and white screen. I remember asking him what it was and what was he doing. Well the machine was a Radio Shack TRS-80 and after he continued to finish typing all the information in the book he typed the word “run” and hit the enter key. The result was a game that began to display and the birth of what would become my life’s obsession.

We moved to California shortly thereafter and I continued to try and follow the world of computers through magazines and finding friends that had them. Finally for my 15th birthday I was given a Commodore Vic-20 which was my first computer. I was so excited. I was buying copies of Compute magazine and typing in the programs and running them and just continually being amazed. I remember the first piece of software I ever bought was a terminal program at a store called Future Tronics in Westwood CA that created a custom font to give the Vic-20 a 40 column screen since it only displayed 28 characters. Ah yes, computers were very cool but now I had a modem and I was connecting my computer to other computers and discovering and becoming friends with new people I met on BBS’s. It added a whole new world to what seemed like a pretty solitary hobby of mine at the time.

So I continued through high school were I was a bit of an oddity being both a nerd with my computer hobby and a jock playing football. This wasn’t very common in the early 80’s and I struggled being accepted by either group. I continued learning more about computers and upgrading to a Commodore 64, and then an Atari 400 and then an 800 and my school got it’s first computer lab while I was there made up of Apple 2’s. I also ran a BBS of my own and delved into the world of phreaking and hacking and pirating. The BBS scene was great but felt somewhat limiting. I mean it was only a one to one relationship between your computer and that of the BBS where you could read what others had posted and leave your responses. I remember auto-dialing the popular BBS’s just waiting to not get a busy signal so I could get in. Sure there were also multi-line BBS’s emerging around this time but they all seem to be for dating sites. I also believe it was around this time that I first discovered Compuserve. This opened yet another world for me were I could now expand my connection with other computer users from all over the country. This was amazing and opened a new chapter in computing for me as later AOL would do the same by bringing a visual experience.

After graduating high school I continued playing with computers and ended up getting a job at a computer store. This was interesting because strangely enough I had never really though about turning my hobby into a career. After working at the store for a while one of the customers approached my friend and I to co-manage a new store he wanted to open up. That was a great opportunity and I was there for several years where I got to learn every aspect of running a business. Unfortunately learning meant that we made many mistakes and eventually that business did not survive. I was looking for work and had interviewed to manage an Egghead software store. I also had a friend that wanted to start his own computer store and wanted me to manage it. I got the call from Egghead that they wanted to hire me. At that point I hit an interesting cross-road in my life. Do I take the safe bet and go work for Egghead, or risk trying to build a business from scratch again. I ended up choosing to work with my friend if he made me a partner of this new business.

We had to take on another 2 active partners to have enough funding to get started which also worked with us full time at the store. These were some of the funnest times in my life. We were a niche computer store that primarily sold Atari ST computers for desktop publishing and music workstations. My friend and initial partner was an amazing technician who repaired and upgraded computers while I managed the front-end. We did pretty well for 4 years but then ran into a problem with one of the partners. We tried to resolve our dispute amicably but in the end decided to dissolve the business.

So now my initial partner and friend decided to start another computer business but focusing more on service and consulting. Another major event would occur that would expand my computing horizons to a whole new level. We went to Comdex that year as we had many years previously to see what was new in the world of computers. We happened to walk by a booth that was demoing something I can’t remember but they had a computer screen with the mosaic browser on it displaying a website. This was the first time I had ever seen either so I spent some time with this person who was nice enough to explain the basics of the internet and world wide web to me. My eyes were so lit up after that I can’t even begin to explain it.

My friend and I came back and I immediately wanted to get started learning more. I picked up a Microtimes and saw an ad for an ISP called Earthlink. I remember signing up for the service and having been one of the first few hundred that had. The setup process was pretty complicated. They had to mail me disks to install the TCP/IP stack for Windows 3.1 and then faxed over all the settings for DNS, Gateway, etc. Eventually I got it running and for the first time since watching that game on the TRS-80 I felt that mountain of excitement again. I saw so many amazing possibilities and felt that this could change our world as we knew it.

My friend and I began diving in trying to learn everything about networking, TCP/IP, setting up web servers, mail servers, etc. We saw this as the future and wanted to get in on the ground floor. After some time we began doing work for a small magazine publisher. We were helping set up their network and working on their website hosted by a third party. After a short while the owner of the company wanted us to come on board full time to run all of his network and internet operations. I like to tell the story that he bought our company but he effectively offered us 3 year contracts with a very nice salary to shut our business down. And as they say, the rest is history.

When I first began writing this post I wasn’t planning on telling you that full story, but I guess the context is to show why I feel so thankful to have grown up in these times. I love computers and the internet. I think we spend so much time nowadays discussing new web technologies and talking about the future of the web that we now take things for granted. I think on a day like today it’s nice to take a step back and look at this from another perspective. I think at a high level the two major things the internet has brought us is knowledge and communication. The ability to quickly and easily tap the world’s information to learn anything you want about any subject matter is amazingly powerful. The tools that now allow us to not only easily communicate with each other, but also provide the glue to discover new and interesting people and become friends both online and in real life based on mutual interests and other factors is mind blowing. I’ve met and become friends with so many people that would have been seemingly impossible to build those relationships without the internet. On top of that I’ve been able to build a career and a hobby because of the internet it. I feel so lucky to have grown up during the birth of these technologies. I often wonder what I’d be doing with my life if neither of these were around. Today I just wanted to spend a little time looking back and reflecting on why I’m thankful for computers and the internet.