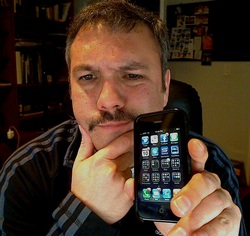 In anticipation of tomorrow’s announcement of the iPhone finally making it’s way to the Verizon network the inevitable barrage of blog posts analyzing why you should or shouldn’t switch are starting to make the rounds. Gizmodo has flat out said “Don’t buy the Verizon iPhone“Â  and Zack Epstein of the Boy Genius Report states “Why Iâ€™m not switching to the Verizon iPhone: Need for speed“. While many of these posts will proclaim the correct decision one way or the other, it’s not going to be that cut and dry.

Here’s my case for probable switching, but everyone has different circumstances in which they need to weigh the pros and cons for themselves. I currently own an iPhone 3G which is currently unusable with the latest iOS 4.2. My contract with AT&T expired 3 months ago and my son’s contract as an added line just expired last month. So I currently have no contractual obligations to stay with AT&T. If I did that would force me to think hard about what I’m willing to pay to leave AT&T and depending on how many lines you have it could get really expensive to do that. If I was still bound to a lengthy term I would most likely ride it out and wait to see how the iPhone fairs on Verizon’s network. Now in my case I decided to wait for both what was announced at CES as well as the fact that all my contracts would be up right now and there would likely be an iPhone announcement on Verizon.

I was considering getting an Android but I was lucky enough to have a friend let me borrow their Nexus One for a while so that I could get a feel for the OS. I recorded a Cinchcast that summed up my experience (see below) and while I think there are some great things about the Android OS I personally feel the iPhone still provides an overall better experience. The announcement of Verizon 4G LTE Android sets were pretty exciting at CES but the way I see it is that I will purchase an iPhone and wait for these new devices to be released an mature a bit so they can get the kinks out. I’m guessing the second generation of these will be really nice.

I need a new phone now and the way I see it the iPhone is my current favorite. Another benefit for me is that I will most likely purchase the iPhone and then if I decide to switch to Android I can either wait until my 2 year contract is up or can switch earlier by selling my iPhone which will likely retain it’s value very well and then probably get a great price on one of the many used Android handsets that will be available. In fact I might even get a used Android to play with on Verizon as well. The rumor is that Verizon will offer an unlimited data plan while on AT&T there is a cap. But the flipside to that is that reports are that AT&T 3G speeds are faster than Verizon so you have to weigh that as well. The final kicker is that I have quite a few friends and family already on Verizon that are currently costing me minutes on AT&T that will no longer be the case when I switch to Verizon. This is another benefit to consider.

If I already had an iPhone 4 on AT&T and locked into a contract for the foreseeable future I’d just ride it out and wait to see what happens when the barrage of people start jumping on the Verizon network to hear their feedback and make sure the network doesn’t implode under the new usage. But I’m in LA and reception here while not great isn’t as bad as cities like San Francisco or New York. So location may be another swaying factor. Anyways these are some of my thoughts so take your time and make the best decision based on all the factors.