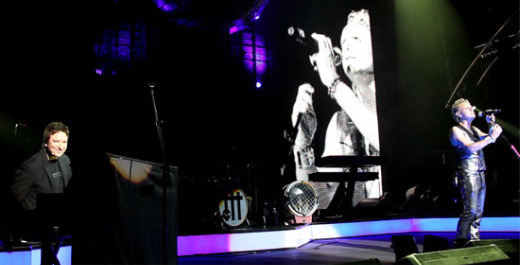 Alan Wilder shocked Depeche Mode fans around the world tonight, joining his former band onstage for the first time in 16 years to accompany Martin Gore on piano during a performance of â€œSomebodyâ€ at a Teenage Cancer Trust charity concert at Londonâ€™s Royal Albert Hall.

Weâ€™ve got several different videos of the brief reunion posted below â€” one of them is actually a two parter, strung together â€” as well as clips of several other songs from the Royal Albert Hall show, plus the full setlist. (See video after the jump.)

Wilder explains the reunion on his official site:

â€œDave (Gahan) contacted me a few weeks back and asked if Iâ€™d be willing to join them on-stage. He assured me that everyone in the band was into the idea. I was very happy to accept, especially as it was all in a good cause and we were long overdue some kind of reunion of this sort. It was great to see everyone again and catch up a bit, and it was also the first time I have actually â€™seenâ€™ Depeche Mode perform!â€

Be sure to visit the link for all the details. This is so cool. I wonder if it will lead to any future collaborations with Wilder? We can only hope. I also found this official soundcheck video in glorious 1080p on YouTube thanks to Helen Sventitsky for sharing this.