Today I received my Acer Aspire Revo which I ordered refurbished from PC Connection Express for $159 which I heard about from TechBargains.com Unfortunately the deal appears to be gone but they can still be had for $199 new at Amazon

I first heard about this machine on Lifehacker featuring this machine in their post “Build a Silent, Standalone XBMC Media Center On the Cheap“. I fell in love with XBMC on my original Xbox and have since tricked out my PS3 to try and get most of that functionality but have still longed to get XBMC as well as Boxee added to my Home Theater. I toyed with the idea of hacking an Apple TV to run Boxee but it didn’t handle the Netflix streaming. 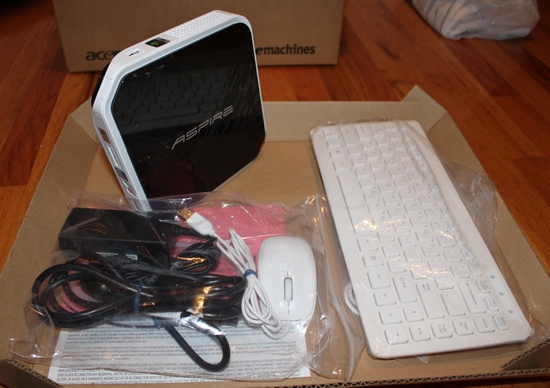 I also saw the Boxee box at CES and was pretty excited about it but it’s the same price as the Acer and only runs Boxee. Now I can run XBMC, Boxee, and anything else I decide to since this is a standard Windows PC running XP Home.

This little box has really gained quite a following as a great little budget HTPC as many folks have really taken a liking to it and been finding all kinds of ways to hack it. I really look forward to learning more about it and reporting back how it works out. In the meantime here are some links if you’re interested to learn more about it.