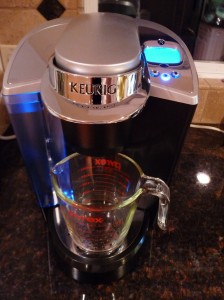 I don’t fancy myself as a coffee connoisseur (read snob) but I do like a decent cup of coffee. I’m also that person that can’t be talked to in the morning until I’ve had my first cup. A few years ago I learned about the Senseo Pod Coffee maker

and bought one soon after.

I became a huge fan of being able to quckly brew a single cup of coffee. I also really enjoyed my Senseo, but alas the unit died on me recently and I was prepared to replace it but had been hearing buzz about the Keurig Coffee Brewing System and decided to do a little research.

Everything I read about it pointed to a pretty good system. So a few weeks ago I’m walking the aisles of my local Costco when low and behold I came upon a special Keurig package deal. It was for the Keurig B60 model

, came with a ton of sample K Cups (the single serving cups used) and even included an adapter to use your own coffee as well. I figured I had to try it and snapped it up. 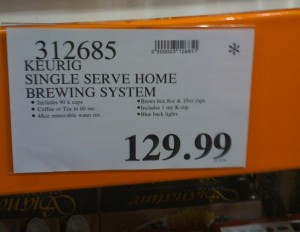 Overall the system is somewhat similar to the Senseo but there are a few noticeable differences. For one this unit is built much better and feels sturdy. The K cup system is also a lot cleaner than using the exposed coffee pods. No muss or fuss having to clean parts after a brew. Brew time appears to be about the same. The Keurig does have 3 cup size settings (small, medium, large). You can really only use the first two settings with standard K cups, I tried the large but the coffee tasted to weak for my taste. The large option is nice if you brew your own with the adapter where you can control the strength.

brew the best. It also came with a selection of Teas as well as hot chocolate. There seems to be huge support from coffee makers for manufacturing K cups. So basically it has great support in the market and seems to be sold and stocked in many outlets now. 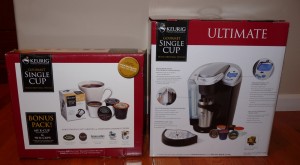 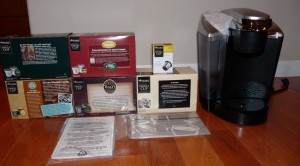 I do admit that I miss the forthy crema that the Senseo used to generate but I’m willing to trade it for the better tasting coffee the Keurig makes. If you are in the market for a single cup brewing system you should definitely take a look at the Keurig. Overall I’m very happy with it. they also offer smaller models than the one I got.